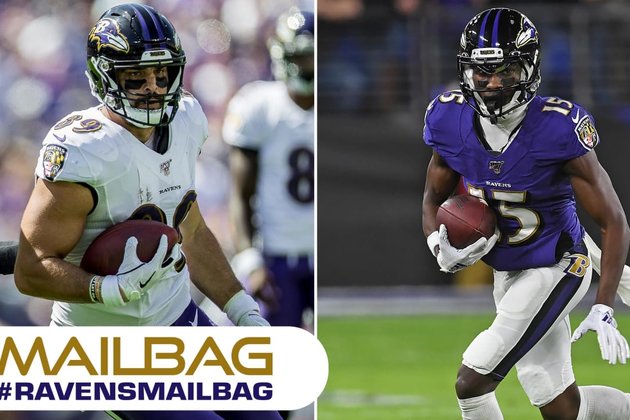 Garrett Downing is on vacation this week so Clifton Brown is stepping in to answer your questions, and it seems a lot of you want stat predictions for the 2020 season.

Mink: Both have a chance, and I struggle to say which is more likely because I think both could see even more passes thrown their way this season.

Andrews wasn't too far off last year at 852 yards with a team-high 98 targets in 15 games played. Considering the Ravens traded Hayden Hurst this offseason, that could mean Andrews has an even bigger share of the receiving workload at tight end. Going into his third season, it wouldn't be surprising to see Andrews making the leap to Travis Kelce (1,229 yards on 136 targets) kind of production if he can stay healthy. Andrews has a great feel for the game and will only continue to sharpen his craft.

Brown came in second in targets (71) and receiving yards (584) last season and is a prime candidate for a Year 2 breakout now that his foot is finally healthy. He's made it no secret that he intends to have a very big year, and his impressive offseason workouts certainly help his case. With his speed fully returned this year, expect Brown to make more big plays that became his calling card in college when he topped 1,000 yards both of his two years at Oklahoma. A few more of those, paired with more targets, could easily put him over 1,000 yards.

Cliff: I think Lamar Jackson will again lead the Ravens in rushing yards. I don't think he'll run for 1,206 yards like he did last year, but he's such a dynamic runner that he's going to continue making big plays both on designed runs and scrambles. The addition of J.K. Dobbins adds another piece to the running game that could make it difficult for any of the running backs to have a 1,000-yard season. Ingram, Dobbins, Gus Edwards, Justice Hill and Jackson will allow the Ravens to run as much as they want without overworking anyone. I see that as a plus, not a problem.

Mink: Even though Harrison is thought to be more of the traditional downhill run stopper (he's much too versatile to be put into a box, by the way), I still expect Queen will finish with more tackles. He was the Ravens' first-round pick for a reason and will probably be a three-down linebacker whereas Harrison may start his career as more of a rotational defensive player. Queen could very well lead the team in tackles as a rookie just like C.J. Mosley did in 2014. Mosley edged out veteran Daryl Smith back then. I expect Queen will probably be contending with last year's tackles leader, Chuck Clark, for the title this year.

Cliff: Reichsteiner could certainly make the 53, but I'd go with Jacob Breeland as the undrafted free agent most likely to make the roster. Offensive Coordinator Greg Roman loves utilizing tight ends, and the Hurst trade gives Breeland an opportunity to have an immediate role. General Manager Eric DeCosta sang the praises of Breeland and fellow tight end Eli Wolf after the Ravens signed them, but I'd give Breeland the edge. He's a talented pass catcher who was on track to be drafted prior to his injury. He looks like a keeper.

Mink: Yes, if it still were not deemed safe enough for players to return to their team facilities by mid-July, I could see there being a virtual training camp just like OTAs are virtual now. However, I don't think that will be the case. There are already reports about the possibility of players returning for some kind of minicamp in a month. Rookies could also potentially start on-field practices before training camp opens. Of course, it's all difficult to judge at this time because the COVID-19 landscape keeps changing, and if there's a surge of new cases after states re-open, that could delay the start of real, on-field training camp.