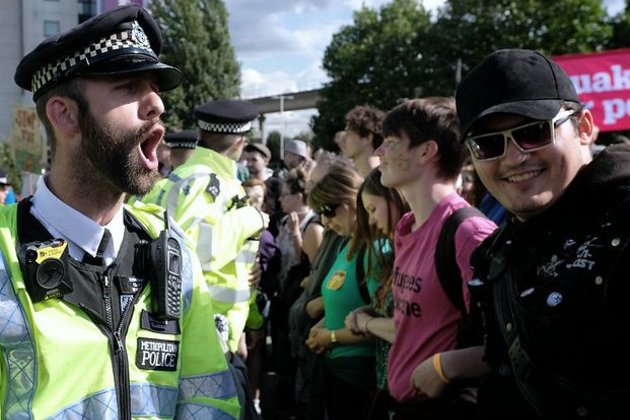 Not all COVID-19 measures taken in Europe respect human rights

What was normal just a few weeks ago is now impossible in many European nations because of the risk of COVID-19 infection and the measures introduced by various states.

Still, there have been plenty of ideas proposed to contain the coronavirus. A University of Cambridge research group, for example, has collected and identified 275 different measures throughout Europe. Some of these instruments are already in force.

Others seem rather bizarre, like a regulation defining the use of pliers to reach products in local shops.

Violation of these measures can be extremely costly in many places thanks to expensive fines issued by local police, state authorities and courts. Human rights organisations, such as Amnesty International, for example, warn against increasing restrictions that violate fundamental rights in Europe.

Many Europeans agree that the coronavirus crisis cannot be used to wipe out human rights. Some measures are needed to protect the health of European, though some governments are using this pandemic to undermine the rule of law. Others have issued highly discriminatory measures: even outright repression and censorship has been seen.

In particular, countries like Hungary, Poland and Turkey have been criticised for violating fundamental human rights.

In Hungary, for example, Prime Minister Viktor Orban is using the COVID-19 crisis as a pretext to gain unlimited power, but not yet claiming, "I have absolute power" like U.S. President Donald Trump. The illiberal and anti-Semitic Orban has introduced a law that allows his Government to govern indefinitely by decree. Governing by degree is a further step into the direction of a European police state.

But even in countries whose governments are not suspected of exploiting the epidemic to seize power, citizens have not always had it easy in recent weeks. At times, this happened because of overzealous police officers given additional powers through emergency or disaster rules, as well as fellow citizens ready to accuse their neighbours of violating these rules.

A few examples follow, of the state's intrusion into everyday life and violations of human rights, showing the current state of affairs in Europe.

Spain: Penalties for the poor

Spain's various police forces have imposed just over half a million Euros in fines for violating the curfew. Since 14th March, only those who go shopping, visit a doctor or a pharmacy, go dog walking or have to go to work are allowed to take to the streets. Any other movement is strictly forbidden.

In Spain, it is not a local police officer who determines how much the respective fines will be. The authority to send out notices of penalties rests with the local state office.

Those who live here have, if anything, a very low income. Many of the residents are first-generation immigrants. Apartments are cramped, usually have no balconies and often not even a window facing the open street. The back streets and courtyards are small and dark. Parents often live with their adult children in single rooms. It comes as no surprise that regional television stations showed pictures of people from these neighbourhoods walking in the street or simply sitting on a park bench.

These activities can incur steep fines.

Italy: Shopping in your neighbourhood

Whether at highways leading in and out of Italy's Capital City of Rome, a motorway entrances or exits, or at essential intersections into the cities, there is no passing the checkpoints of the Italian state police, the city police and the Carabinieri, Italy's national gendarmerie. At these checkpoints, police vehicles are narrowing the road into highly restrictive lanes. Everyone is asked exactly where people are going.

Italians know such controls mainly from television. Today, hardly anyone dares to venture into the streets unless he or she has really a good reason to do so. One of the most important things is the media coverage of such police controls so that people are able to see what is happening.

Austria: The spy and the accuser

In Austria, neighbourhood aid and solidarity are flourishing during the crisis. But there is also plenty of spying and denunciation. Police have been urged to rebuke and, if necessary, punish people who do not comply with the social distancing rules. People easily violate strict restrictions that have been ill-defined. There have been cases where police officers interpret these rules rather arbitrarily.

Since the official start of the curfew in France on 17th March, the police have issued 600,000 penalties notices for failing to comply with France's lockdown. Police conducted more than 10 million checks on suspected violations of coronavirus regulations. France's police demand that if you are on foot or in a vehicle on the road, you must be able to explain the reason for your movements.

To explain your movements, French people have to download a specific travel form. On this form, people are forced to explain their movements. There are only a few approved reasons for leaving an apartment. These have to be ticked and confirmed by the state. Personal details such as date and place of birth as well as a signature are required. Those still working also need a written certificate issued by their employer to be able to travel.

A poorly filled form can cost people dearly. The fine, initially set at €38, was quickly increased to €135 in order to deter people. Anyone caught multiple times will face a fine of €1,500 or, in severe cases, even imprisonment. Cases of overzealous police officers are already known. Some police officials seem empowered by the arbitrariness of the rules. A local woman found out that simply buying a pregnancy test at her local pharmacy was deemed not explicitly urgent by a police officer.

Germany: A potpourri of steep fines

As German officials discuss further restrictions, the state of North Rhine-Westphalia offers a special catalogue of fines, punishing the flouting of coronavirus restrictions. North Rhine-Westphalia is the first federal state to issue a catalogue of violations, which are now deemed a criminal offence. Anyone who breaches those rules will have to pay up to €5,000. In the event of repetition, this can even be as much as €25,000.

While most people in Europe agree with the restrictions ordered by individual states, many are concerned with the powers given to the police as well as the arbitrary character of many rules enforcing the perception that there are police states on the rise.

Dr Thomas Klikauer is a teacher at Western Sydney University. His latest book is on a right-wing German political party call "AfD".